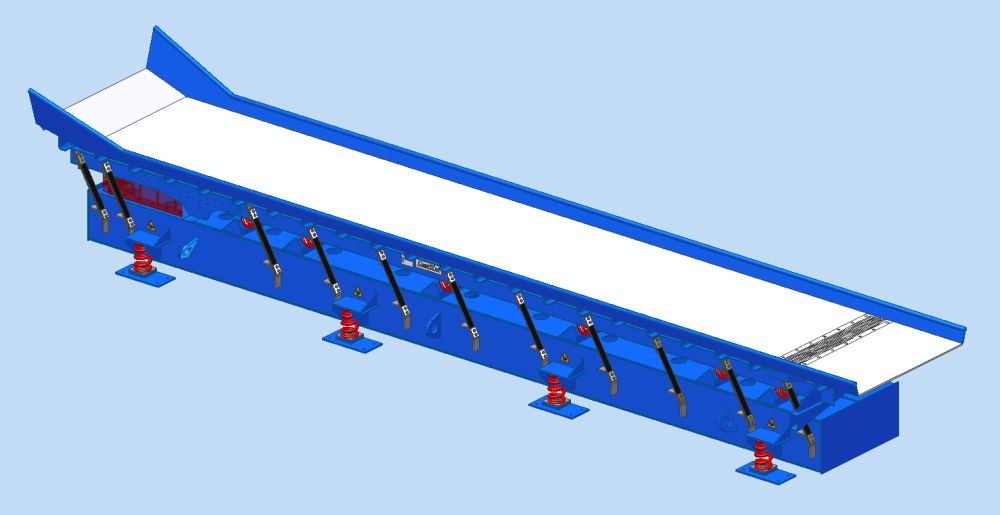 ConviTec sorting feeders are CSF eccentric conveyors and are used to transport unit loads and/or bulk materials such as e.g. sand and/or casting. They are also used as sorting feeders. The eccentric conveyor is designed as a two-mass system with replaceable, wear-resistant troughs. Special fixing elements for compensation of temperature expansions connect the conveyor trough with the longitudinal frame at high temperatures of the casts.

The drive unit of the eccentric conveyor consists of a three-phase motor, belt drive and slider-crank mechanism.
The occurring forces are reduced by a vibration-reducing frame in order to diminish the foundation loads.
The construction type of the eccentric conveyor as two-mass system is particularly appropriate for being used with manipulators or separation works as well as for manual workplaces. In this connection straight and curved conveyor sections can be combined. Mechanical forces of the working manipulator additionally arising on the conveyor trough are absorbed and isolated by means of compression springs due to the highly elastic support.

In order to be able to process your inquiry more efficiently you will find a questionnaire here through which you can send us the most important information already in advance.

Are you interested in our sorting feeders? Or do you have any further questions?
We look forward to your inquiry.